Interview with Geraldine, Friend of the RWA - July 2008

Robert Hurdle's house lies in a peaceful cul-de-sac in High Kingsdown, Bristol. Its plain Victorian façade is wreathed in wisteria. In answer to the bell he at the door and motioned me through the hallway (which was lined with works by his friends) towards the garden. We entered through a conservatory filled with exotic plants, datura, and masses of vivid pink bougainvillia. A small green parrot greeted us from its cage. We sat under a canopy of meditarranean trees by a small water lily pool. Over a pot of tea I questioned Robert about his life.

Geraldine: Tell me about your childhood.

RH: My post-Victorian childhood was spent in Bushy near Watford. In the garden was a wooden chalet where my mother, Flora, lay in her bed suffering from consumption, which had been diagnosed shortly after my conception. I was initially cared for by a nurse - plump jolly Miss Filmer. I had little physical contact with my mother. She died when I was five.

Geraldine: So you and your brother, George, became motherless. How did your father cope?

RH: My father, Arthur, a quiet gentle man, whom, I dearly loved, married our housekeeper, Gertrude. We moved from Bushy with its memories to a small newly-built terraced house in East Sheen. My father worked all his life in the city. The youngest son of a farm labourer in the village of Crondall, Hampshire, he was allowed to stay at the village school longer than most of the pupils.

He escaped to London eventually to become the managing clerk to a solicitors' firm, Biddle, Thorpe, Welshford & Gate, where he remained a valued employee for all his working life. A self-educated man he had a good library of books and he loved the theatre.

Geraldine: Were you happy in East Sheen?

RH: No. I had an underlying resistance to middle-class values and disliked suburban living. A happy release, were the periodic visits to stay with my stepmother's sister, Maggie, who was married to a farm manager in Northamptonshire. They lived in a fine stone farmhouse. I fell in love with farming life, responding to the sounds, smells, and texture of the countryside and hated returning to East Sheen. I dreamt of becoming a farmer encouraged by reading Adrian Bell's books on farming. Another reason for my dislike of East Sheen was the County School for Boys at the top of our road. With the exception of Art, English and a few other subjects, I made little progress, not helped by absences due to ill health. I eventually failed to reach 'Matric' standard.

Geraldine: Was that the end of your education?

RH: It was the beginning. It was with great joy that I left school at the age of sixteen to go to the local Art School in Richmond. It was a good period - congenial companions, pretty girls and success in my studies. My tutors were part-time visitors, notably R A Wilson (the father of a past curator of Bristol City Art Gallery) and James Holland, Unhappily this pleasant life had to come to an end; my father was reluctant to fund me any further.

Geraldine: Did you continue to paint?

RH: Yes. It was a time to leave home. I took rooms in London, making a living doing hackwork in various small advertising firms until I was taken on by a more prestigious agency, Erwin Wasey in Smith Square, Westminster. I never intended to remain in commercial art. I painted constantly in the evenings and at weekends. I rented a large basement room in Torrington Square where I painted with some urgency from drawings I made in the nearby streets, cafes, and parks. Soon my walls were covered with paintings.

Geraldine: Did you manage to paint during the war?

RH: No. It all came to an abrupt end with the outbreak of World War II. I happened to be first on the list to be constripted. Like many of my friends, I had pacifist views and registered as a conscientious objector. This delayed the inevitable, but finally I was sent to serve in a non-combatant corp. We were a very mixed bunch of 'conchies'. We laboured digging trenches or shifting heavy crates in army warehouses. We had many discussions about war which was doing badly at that time. Some of us realised we no longer had the right to be 'conchies' and transferred to combatant units.

I chose the Royal Engineers and became a sapper in the bomb disposal unit. My six years of military service made little difference to the outcome of the war, but it certainly delayed my progress as a painter.

Geraldine: You were a 28-year-old ex-serviceman. It must have been a problem to adjust yourself to the outbreak of peace.

RH: On being demobbed a year after the end of the war, I needed time to rediscover myself as a painter. Grants were easily available to ex-servicemen. I chose Camberwell Art School on the advice of the Registrar of the Slade who had seen the photographs of my pre-war paintings.

Camberwell was dominated by Euston Road painters, led by William Coldstream. There was strong emphasis on objective drawing. Constant attendance in the Life Room transformed my rather freestyle into a disciplined, measured, life-size methodl I worked in my Bayswater basement flat, by chance next door to William Townsend, and he gave me great encouragement. I drew canals, street scenes and views of the parks, working on a series of paintings from these drawings. I exhibited with the London group and it was there that I sold my first painting.

After two years, my Camberwell grant ended, and I was ready to face the future.

Geraldine: How did you make a living as a painter?

RH: Teaching in an Art School was a congenial way of obtaining security, whilst at the same time givng a fair amount of time to practice as a painter. I was appointed part-time lecturer under George Sweet who was Head of Painting at the West of England College of Art in Bristol. Bristol was then a living port. I continued to paint in my London style. Choosing a view of Welshback seen from Redcliffe Parade, the floating harbour was alive with the movement of boats and the gigantic cranes, I made my first Bristol painting. It was purchased by the City Museum Art Gallery.

Geraldine: Did you continue to paint from drawings?

RH: No. I was forntunate enough to rent a top maisonette in 3 Windsor Terrace. There were enticing views from both front and back windows. These made me want to paint directly from nature again. I set up my easel in the city and surrounding countryside. After some time I discovered a plantation on the edge of Ashton Court. This inspired me to paint trees. So through all seasons I used the wood as an outdoor studio. This lasted many years until one day the wood was felled. I decided that the time had come for me to retreat to the comfort of the studio.

Geraldine: How did this break from your direct painting in front of the motif, affect your work?

RH: From now on my painting method changed radically. Working away from the subject stimulated a more reflective approach. My style became more formalised, and I developed a very personal way of applying oil paint. Working on a horizontal ground I applied translucent overlapping glazes. From drawings I would make cut-out templates to control the design. Light was the determining factor. Swift drawing and the camera assisted the memory in capturing the transient scene. I worked on large canvasses, but later reduced the dimensions working on stretched sheets of etching paper instead.

Geraldine: The sun was still shining as we finished our tea in the peaceful environment of Robert's garden. Silent except for the sounds from nearby the nursery school, the birdsong of the canaries and the gentle splash of the fountain. Shelly, the mackerel tabby lay sleeping curled up on her cushion.

I asked him how he felt now after nearly 90 years of living?

RH: Ninety years is a hell of a long time. The social, cultural and technological changes over that period have been immense, with an alarming acceleration. Approaching the age of ninety doesn't help the physical act of painting, but I continue - at a slower pace.

It is best not to think too much about the future, but to live for the present, considering myself fortunate to have good friends and loving children, and to be living in a marvellous natural world. 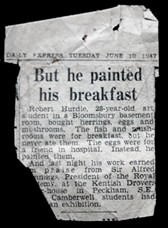 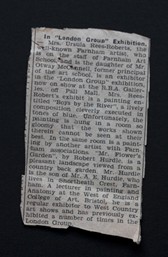 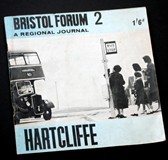 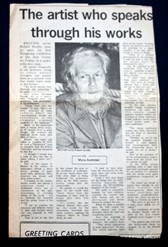 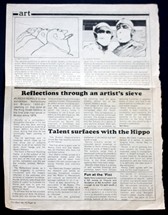 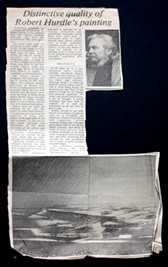 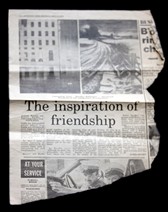 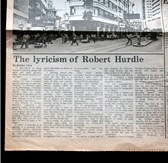